We've happy announce some fixes. It was about time.
I will keep this short and sweet.
There have been some visual changes in the Dashboard.
There is a lot more spaces for the buttons when the disk usage was moved under the site name. 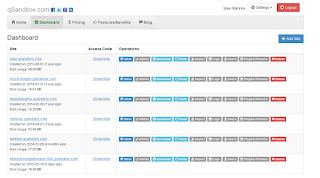 Also the limits weren't removed for new sites even though users were premium members. This is done automatically now.
And the best part is that we've had a beautiful glitch which was causing the system to charge monthly prices for yearly subscriptions i.e. plan at $50/year was charged at $5/year. That's pretty nice, eh? Good for clients and not good for us in the long term.
Congratulations to those lucky customers who were able to get the most affordable test sites ever! (they have been notified). We'll adjust the price for the next years though.
qSandbox Team.
Posted by Orbisius at 9:37 PM

qSandbox.com is a service which allows you to setup a test/sandbox WordPress site in seconds. No technical knowledge is required. Why? Because you can test themes and plugins in test environment before you actually put them on your live site and if something breaks that's ok.